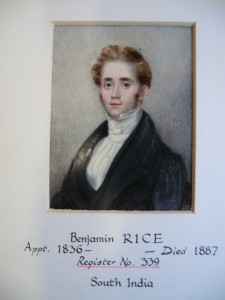 Benjamin worked as a missionary in Bangalore for fifty years.

Born in 1814 and leaving school at 13, he was placed as a clerk in a lawyer’s office. But his real concern was to study, and he sometimes rose at three in the morning to do so.

At 15 Benjamin went to work for an uncle in his counting-house; he joined the Church at 15 and soon began to feel drawn to missionary service.

In 1834 he entered Homerton College in Hackney, a small college for dissenting ministers. In 1836 he was ordained and married within a week to Jane Peach Singer, a girl from Islington already wishing to become a missionary and negotiating for a post with the Female Education Society for China and the East. But Benjamin had been appointed by the London Missionary Society to go with two college friends to South India.

Bangalore was then the first city of the State of Mysore. The town was in two parts, the Pettah, the original Hindu town, and the military Cantonment, with in between Cubbon Park and the large compounds of the Europeans. The local language was Canarese, now called Cannada or Kannada; Tamil and Hindustani were also commonly used.

The Bangalore Mission of the London Missionary Society had begun in 1820. The principal work was to be among the Canarese people, who were thought to be caste-ridden and conservative. Secondly, there was a more progressive Tamil congregation. Thirdly, there was an English service held in a chapel in the Cantonment.

The young missionary made rapid progress in learning Canarese; he was able to preach in the language within nine months of his arrival. Speaking to an audience in the Pettah often seems to have been a trying experience, and Benjamin did not feel he was successful in converting the heathen, which was of course what he most wished to achieve. Benjamin learned Tamil and briefly preached in that language too.

His first tract, Strictures on Hinduism, was published in 1839 and represents the beginning of a substantial evangelical output, much of which can still be found. In 1840 he began nineteen years’ work as a member of a committee revising the Canarese Bible, first produced in 1827.

However, after his third year Benjamin began to be much concerned with the superintendence of schools, and to fill an obvious gap started to write textbooks for them in the native language. His publications include reading books and texts on Arithmetic and Geography.

In 1840 the first Canarese Day School (perhaps we should call it a Class) had been opened; the following year there were three, with 35 pupils who came once a week to the house for instruction and ‘on other occasions Mrs Rice visited them at their schools’. Benjamin wrote that ‘the fact of Hindu girls being educated, and of English ladies going to instruct them in their own language, seems to have created much interest among the people.’ 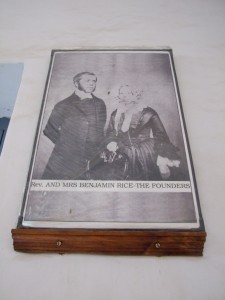 In 1842 a Canarese Girls’ Boarding School was established under Mrs Rice’s care. It still exists, now called the Mithralaya. In 2009 the children were singing from a book of hymns in Canarese—by Benjamin Rice.

At this time Benjamin undertook missionary tours around the state, lasting on average 11 days and involving preaching in the village streets, subjecting himself to apathy and abuse. In the same period he superintended the Boarding Schools intended for children of local people who had Christian sympathies; in 1842 it seems there were three boys and six girls at these schools! There were also day schools for Hindu children to look after.

Benjamin soon turned his attention to higher education in English. He and another colleague started an Anglo-Vernacular School in the Pettah in 1847, and had about 100 scholars. By 1859 the school had 397 pupils, and expanded into a new building where the High School is now. It was clearly an important educational establishment and continued to grow, training ‘Hindu young men of the higher classes’, as well as ‘giving a good education to the children of native Christians’. 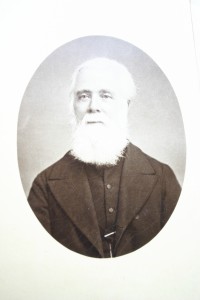 Benjamin was evidently an excellent preacher, thoughtful, simple and clear. One of the native Christians said ‘Every word that falls from Mr Rice’s lips is gold.’ He was also good at secretarial tasks, which he carried out for the Bangalore Bible Society, the Bangalore Tract and Book Society, and the South India District Committee of the London Missionary Society for many years.

In 1864 his wife died; she had worked unremittingly for the women of India. Benjamin remarried, his wife being the daughter and widow of CMS missionaries. He took charge of the Theological Seminary, and prepared textbooks for the students. He and his wife continued to supervise four Girls’ Day Schools, with about 400 girls in total.

In 1877-8 occurred the Great Famine, in which a quarter of the inhabitants of Mysore Province perished. The rains failed, and at one time 40 people were dying each day in the town of Bangalore, besides twice as many in relief camps and hospitals. Benjamin was a member of the local Committee which tried to mitigate the effects of the famine; ‘when large numbers of fatherless children were left on the hands of the State…he resolved, although he had no resources on which to depend for their maintenance, to receive a number of boys and girls, and for this purpose to re-establish the long-closed Boys’ Boarding school. Seventy boys and girls were thus received, all in a very emaciated condition.’ 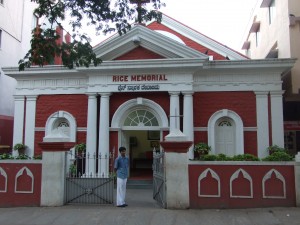 To celebrate 50 years of service to the Mission, a celebration service was held at the London Mission Chapel, Infantry Road in January 1887. Only a month after this celebration, he died and was buried in the New Cemetery, Oossoor Road, Bangalore.
Thirty years after his death a new church was built on the site of the old where he had ministered for so long.

It was opened in 1917, and was dedicated to Benjamin and his son Edward, also a missionary in the same area; it still houses an active ministry and congregation, now of the Church of India.

To sum up Benjamin and Jane’s achievement, it was unquestionably the furthering of education in Mysore for both boys and girls. Their work was carried on by their eldest son, Lewis, and by two younger sons, Henry and Edward, both missionaries.