This website is about the Rice family who lived and worked in India from 1837 – 1925 and dedicated themselves to the country for 100 years.

The family descended from Simon Peter Rice, a draper originally from Gloucestershire who set up trade not far from St Paul’s in the City of London.

His son Benjamin was the first to go to Bangalore, as a missionary; Benjamin’s eldest son Lewis became a distinguished archaeologist there; Lewis’s son Douglas was a civil engineer and later Assistant Trade Commissioner for Mysore State in London. A number of Benjamin’s other children and grandchildren also lived and worked in India.

This website has the main details of their lives in India as we know them. We hope that others will be able to add to the story of the Rice family, help us locate other sources of information about them and make the picture was as complete as we can make it.

The website has been put together by Douglas Walthew Rice (grandson of Harold Douglas) and his son Richard Rice. They have been hugely helped by Dr Srinivasa Murthy of Banaglore, who is an expert on the Rice family and has dedicated much time to researching and writing about them. 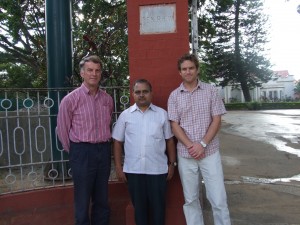